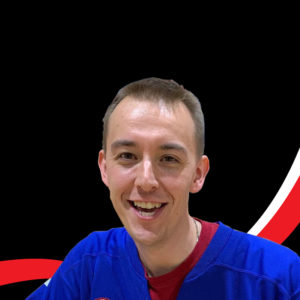 ACCOMPLISHMENTS
2010 NAPHA Best Tournament Coaching Staff, Assistant Coach for over a decade with the Michigan Mustangs through silver and gold finishes.

POWERHOCKEY QUOTE
Powerhockey is more than a sport, it is family.

TEAM YOU’RE MOST EXCITED TO PLAY AGAINST AND WHY?
Calgary as it has been many years since we have played them.

WHY DO YOU COACH?
I coach for the love of the sport and the positive influence it has had on so many of the friends I have made over the past 15 years. I want our players to make strides in their own development as powerhockey players and leaders.

WHAT HAS BEEN THE MOST REWARDING THING YOU’VE SEEN COACHING?
Over the years I have seen the growth our players have made both on and off the court. The impact this sport has made in their lives has helped shape them into the best versions of themselves.